Previously seen here on NHDub, European crew Dope D.O.D. returns with the new video for the Oiki produced “Dirt Dogs”. One of the highlights in the set list of Dope D.O.D.,  the visuals for “Dirt Dogs” capture one long sequence, taking the viewers on the road to something bad. “Dirt Dogs” is from Dope D.O.D.’s The Ugly EP, which is available on iTunes. 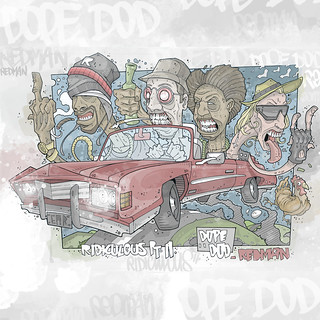 Produced by Posij of Groningen, Dope D.O.D. drops their second single from the upcoming Ugly EP, “Ridiculous Pt.2” featuring Redman. Skits Vicious states, ‘We asked Frank (Posij) to make a remix of the track “Ridiculous” from the Master Xploder tape and he came up with an awesome beat, a really great banger. We were at a Redman show where we played the track for him and Redman wanted in straight away. That inspired us to come up with a whole new version of the track and that’s how Ridiculous II came about.”